Please join The Patriot Project on July 7th, 2018 at 10:00AM. The induction of the Gold Star Monument. In attendance will be Team Fastrax skydiving the American, Honor and Remember flags. Plus The Patriot Guard, Rolling Thunder and The Hoover Band.

Thank you and we look forward to all of you joining us.

Chiropractic Care Touted as one Path out of Addicition

Ground Breaks in Spring 2018 for a Gold Star Monument in North Canton, Ohio

The Patriot Ball is Sixty-four Days Away!

A Special for The Patriot Project Chiropractors

As a special thank you to our member doctors we are offering all Patriot Project Chiropractors half off sponsorships for The Patriot Ball! 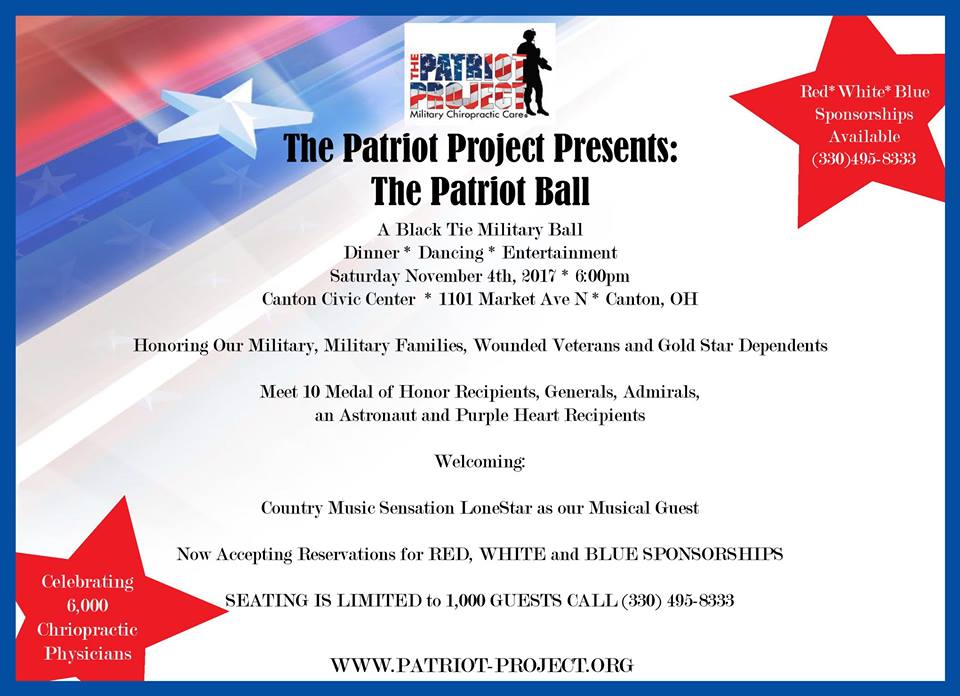 As Adopted by the House

WHEREAS, The members of the House of Representatives of the 131st General Assembly of Ohio, for the reasons herein after set forth, wish to designate October 2015 as Ohio Chiropractic Awareness Month; and
WHEREAS, Chiropractic is a healthcare practice based on the musculoskeletal system and its disorders, which affect the general wellness of the body. Doctors of chiropractic practice a drug-free, hands-on approach to health care that can include the manipulation of the spine and joints to reduce pain, restore mobility, and maintain health; and
WHEREAS, Since Dr. Daniel David Palmer performed the first chiropractic adjustment on a patient in 1895, chiropractic has promoted musculoskeletal health, overall wellness, and disease prevention through good nutrition, regular exercise, and restful sleep. Doctors of chiropractic, through regular interactions with patients and their communities, and in collaboration with other healthcare providers, are instrumental in teaching people about the conservative-care-first approach to health; and
WHEREAS, Increased public awareness of chiropractic is important to conservative healthcare treatment and to containing increasing healthcare costs, and Ohio Chiropractic Awareness Month will be instrumental is this worthy mission; therefore be it

RESOLVED, That we, the members of the House of Representatives of the 131st General Assembly of Ohio, in adopting this Resolution, designate October 2015 as Ohio Chiropractic Awareness Month; and be it further

RESOLVED, That the Clerk of the House of Representatives transmit duly authenticated copies of this Resolution to the Ohio State Chiropractic Association and to the news media of Ohio