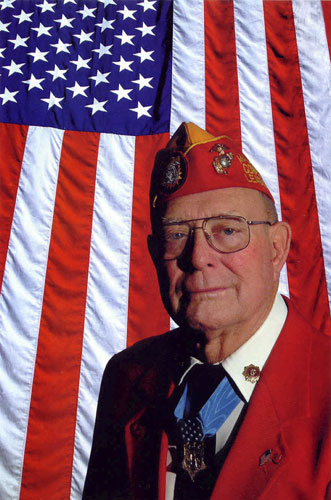 Hershel Woodrow "Woody" Williams (born October 2, 1923) is a retired United States Marine who received the Medal of Honor for his actions in the Battle of Iwo Jima during World War II. He is also the last surviving recipient of the Medal of Honor from that battle.

Williams received his recruit training at the Marine Corps Recruit Depot San Diego, California. Upon completion, he was sent to the Camp Elliott training center in San Diego, where he joined the tank training battalion on August 21, 1943. The following month he was transferred to the training center's infantry battalion for instruction as a demolition man and in the use of flamethrowers.

Williams joined the 32nd Replacement Battalion on October 30, 1943, and left for New Caledonia in the Southwest Pacific on December 3 aboard the M.S. Weltey Reden. In January 1944, he joined the 3rd Marine Division at Guadalcanal. He was attached to the 1st Battalion, 21st Marines, first to Company C and then to Headquarters Company. During July and August 1944, he participated in action against the Japanese at Guam, and in October he rejoined Company C.

His next campaign was at Iwo Jima where he distinguished himself with actions "above and beyond the call of duty" — for which he would be awarded the Medal of Honor. Landing on February 21, 1945, Williams, by then a corporal, distinguished himself two days later when American tanks, trying to open a lane for infantry, encountered a network of reinforced concrete pillboxes, buried mines, and black volcanic sands.

Williams went forward alone with his 70-pound (32 kg) flamethrower to attempt the reduction of devastating machine gun fire from the unyielding positions.

Covered by only four riflemen, he fought for four hours under terrific enemy small-arms fire and repeatedly returned to his own lines to prepare demolition charges and obtain serviced flame throwers. He returned to the front, frequently to the rear of hostile emplacements, to wipe out one position after another. At one point, a wisp of smoke alerted him to the air vent of a Japanese bunker, and he approached close enough to put the nozzle of his flamethrower through the hole, killing the occupants. On another occasion, he was charged by enemy riflemen who attempted to stop him with bayonets and he killed them with a burst of flame from his weapon.

These actions occurred on the same day as the raising of the U.S. flag on the island's Mount Suribachi, although Williams was not able to witness the event. He fought through the remainder of the five-week-long battle and was wounded on March 6, for which he was awarded the Purple Heart.