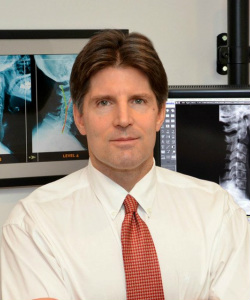 Dr. Mark R. Pustaver of Matthews, North Carolina has been in practice since 1984. Dr. Pustaver completed his undergraduate courses at the University of Wisconsin and received his Doctorate at The National College of Chiropractic in Chicago, Illinois.

After starting his practice in the Madison suburb of Middleton, Wisconsin, Dr. Pustaver continued his studies, earning board certifications in areas of Chiropractic Sports Medicine and Chiropractic Neurology. He began providing care for amateur and professional athletes including treating members of The University of Wisconsin Football, Track, Crew and Wrestling teams.

Dr. Pustaver relocated to Newark, Delaware in 1991 where he helped establish The Advanced Rehabilitating Center.

Since 1993 Dr. Pustaver practices in Matthews, North Carolina where he became the first Chiropractic Physician to work Carolinas Health Care System and assisted in the establishment of Chiropractic Practice and Protocol at Carolinas Integrative Health. He has continued his care of Amateur, Olympic and Professional Athletes and is the Team Chiropractor for both Hendrick MotorSports and The Charlotte Bobcats. Dr. Pustaver is also a member of the North Carolina Board of Assisting Physician State Licensure Chiropractic Examiners, Clinical Competency Examinations.

Dr. Pustaver is also the co-inventor and US. Patent holder of “The Low Back Exercise Device” designed to strengthen the lower back and is the co-author of “Out Smart Your Fork” A mindful Guide to Permanent Weight Loss. Dr. Pustaver’s analysis “Mechanical Low Back Pain: “Etiology and Conservative Management” was features in The Journal of Manipulative and Physiological Therapeutics, July/August 1994. He is the co-founder of the One Nation Foundation, whose mission is to inspire all people to strive for racial harmony and unity. The foundation provides college scholarships to Charlotte-Macklenburg Students.