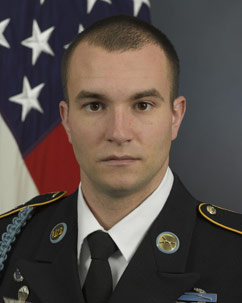 Assignments: Staff Sgt. Giunta enlisted in the U.S. Army in November 2003. He attended Infantry One Station Unit Training and the Basic Airborne Course at Fort Benning, Georgia, before being assigned to the 173rd Airborne Brigade Combat Team, Vicenza, Italy, on May 24, 2004.

Staff Sgt. Giunta, who was promoted to his current rank in August 2009, has served in B (Battle) Company, 2nd Battalion, 503rd Airborne Infantry Regiment, 173rd Airborne Brigade Combat Team, V Corps, Vicenza, Italy, his entire time in the Army. He currently serves as the Rear Detachment Non-commissioned Officer-in-Charge (NCOIC) of Battle Company, responsible for the health, welfare, morale, training, and accountability of all assigned Sky Soldiers, and works side-by-side with other Rear Detachment Company NCOICs to ensure all unit family members are well taken care of while their Soldier spouse is deployed to Afghanistan during Operation Enduring Freedom X.

"Then-Specialist Salvatore A. Giunta distinguished himself by acts of gallantry at the risk of his life above and beyond the call of duty while serving as a rifle team leader with Company B, 2d Battalion (Airborne), 503d Infantry Regiment during combat operations against an armed enemy in the Korengal Valley, Afghanistan on October 25, 2007.

When an insurgent force split Specialist Giunta's squad into two groups, he exposed himself to enemy fire to pull a comrade back to cover. Later, while engaging the enemy and attempting to link up with the rest of his squad, Specialist Giunta noticed two insurgents carrying away a fellow soldier. He immediately engaged the enemy, killing one and wounding the other, and provided medical aid to his wounded comrade while the rest of his squad caught up and provided security. His courage and leadership while under extreme enemy fire were integral to his platoon's ability [to] defeat an enemy ambush and recover a fellow paratrooper from enemy hands."