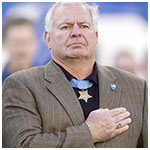 Subsequently, he was selected for specialized training in Basic Underwater Demolition training in Coronado, California and the Navy's elite SEAL community.

Upon successful completion of training, he was assigned to SEAL team One based in Coronado, California from 1968-1974. During the period of October 1968 to January 1973, he completed several tours of duty in the Republic of Vietnam and Thailand.

During this time, he was the recipient of numerous awards. His most prestigious decoration was bestowed for heroic actions on his last tour of duty in Vietnam which resulted in saving the life of a fellow SEAL. For this action during a reconnaissance and intelligence gathering mission, he received this Nation's highest award, the Medal of Honor.

From 1974 to 1977 he served as an instructor at the SEAL training command in Coronado, California. In 1977 he transferred to SEAL team Two in Little Creek, Virginia where he was the senior enlisted (man) in an operational platoon and also served as an instructor for SEAL Basic Indoctrination. In 1978 he deployed to the United Kingdom to serve two years with the Royal Marine British Special Boat Squadron in an exchange billet.

Upon completion of his successful tour with the British, he returned to help establish and operate with SEAL Team SIX. Here he was instrumental in developing new and innovative operational techniques and hardware that formed the foundation for future unique special operations missions.

In June 1982, Lieutenant Thornton received his commission as a United States Navy Ensign. He completed Basic Officer Diving and Salvage Training and immediately thereafter was assigned as the Officer-in-Charge of the Second Class Dive School at the Little Creek Amphibious Base in Norfolk, Virginia. In January 1986, he reported to the USS Edenton (ATS-1) as the First Lieutenant and Diving and Salvage Officer for Combat Support Squadron Eight, at Little Creek. In April 1990, Lieutenant Thornton reported as Bravo Company Commander where he coordinated a rapid response deployment in support of Desert Storm / Desert Shield.

In May 1992, Lieutenant Thornton retired being the last Medal of Honor recipient serving on active duty in the Navy. Michael Thornton now works within the Military Community to help his fellow warriors.