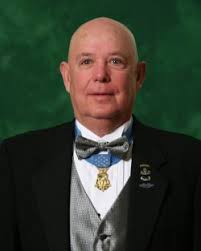 Gary Littrell was nine years old when his uncle took him to Fort Campbell to watch the 101st Airborne Division make parachute jumps. He always remembered watching the men floating down and saying to himself, someday I’ll be doing that. In 1961, on his seventeenth birthday, he joined the Army—once the recruiter guaranteed that he could go to jump school.

After graduating from jump school, Littrell was assigned to the 503rd Regiment, which was reorganized as the 173rd Airborne Brigade (Separate). This brigade was stationed on Okinawa. His next assignment was to the 82nd Airborne Division. He then attended Ranger School, where he did well enough to be made an instructor. During his two years there, the “war stories” he heard from returning Vietnam veterans whetted his appetite for combat, so in 1969 he volunteered to go to the war zone. He learned to speak Vietnamese at the Army Language Institute at Fort Bliss and became an adviser to the 23rd South Vietnamese Ranger Battalion, whose dedication and bravery impressed him.

In the early spring of 1970, Littrell was one of four American advisers assisting the 23rd Battalion of the South Vietnamese Army as it looked for North Vietnamese Army units that had been harassing U.S. Special Forces camps in Kontum Province. On April 4, after 473 South Vietnamese Rangers ran into a concentration of approximately five thousand enemy troops, they established a defensive perimeter on a hill against a ferocious mortar attack. The battalion commander and one of the American advisers were killed in the first day of the fighting. Then two other advisers were wounded, leaving Sergeant Littrell in command.

Over the next four days, Littrell exhorted the South Vietnamese troops not to give up, despite their heavy losses. Moving along the defensive perimeter, he distributed ammunition and tried to help the wounded. Repeatedly abandoning positions of relative safety, he continually called in air support and artillery fire on the advancing enemy. At times he directed the American air strikes to within a few yards of his own position.

On April 8, 1970, Littrell’s commanding officer radioed him to attempt a retreat. Littrell moved out with what was left of the battalion. With helicopter gunships guarding his flanks, Air Force fighters clearing a corridor to his front, and by fighting off constant enemy ambushes, he moved the men five miles to link up with “friendlies.” Of the South Vietnamese Rangers who had begun the battle, forty-one walking wounded came out—but the enemy had been virtually annihilated.

Littrell was ordered home a few months later. At his going-away party, his commanding officer told him that he had been recommended for the Medal of Honor, but nothing happened and he soon forgot about it. Three and a half years later, he was serving with the 101st Division when he was informed that he was to receive the medal. President Richard Nixon made the presentation at the White House on October 15, 1973.

Command Sergeant Major Littrell retired from the Army ten years later. After retirement, Littrell served for many years with the Veterans Administration. In recent years, he has been very active with the Congressional Medal of Honor Society, serving as its president for two consecutive terms.