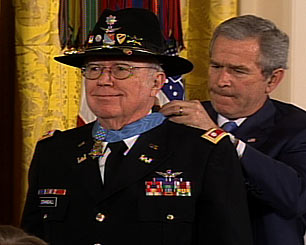 Bruce Perry Crandall (born February 17, 1933) is a retired U.S. Army officer who received the Medal of Honor for his actions during the Battle of Ia Drang. During the battle he flew 22 missions (in one of the aircraft, then flew 6-8 different aircraft for a true mission total of 70-80 missions) in an unarmed helicopter into enemy fire to bring ammunition and supplies and evacuate the wounded. By the end of the Vietnam War, he had flown over 900 combat missions.

After graduation from Engineer Officer Candidate School, Fort Belvoir, Virginia in 1954 and graduation from fixed-wing and helicopter training conducted by the United States Air Force and United States Army, he was assigned to an Army Aviation mapping group based out of the Presidio of San Francisco "that at the time was the largest flying military aviation unit in the world". From there he went on to fly Cessna L-19 Bird Dogs and de Havilland Canada DHC-2 Beavers in Alaska, again for topographic studies. His first overseas flying assignment was to Wheelus Air Base in Tripoli, Libya, mapping the desert for two years flying de Havilland Canada DHC-3 Otter, Beaver, Birddog and OH-23 Raven aircraft as an instructor pilot and unit test pilot.

His next overseas tours were flying over thousands of square miles of previously unmapped mountains and jungles in Central and South America. For this mission, he was based out of Howard Air Force Base, Panama, and Costa Rica. While assigned to the 11th Air Assault Division, Crandall helped develop air-assault tactics as a platoon leader. In early 1965, he joined the Dominican Republic Expeditionary Force as a liaison to the 18th Airborne Corps. Later that year, he commanded the 1st Cavalry Division's Company A, 229th Assault Helicopter Battalion at An Khe, Vietnam. Using the call sign "Ancient Serpent 6", he led a flying unit supporting eight battalions on the ground.